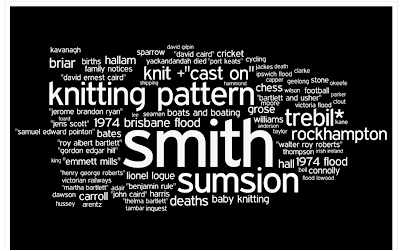 
Despite the content of Trove being varied over 80% of Trove usage and engagement still revolves around digitised historic Australian newspapers. They are the most used content the National Library has ever had, eclipsing everything else with usage continuing to increase. One fifth of the Australian population are regular users of Trove (4 million people). There are about 50,000 searches every hour. Over 40,000 online volunteers have corrected over 58 million lines of newspaper text to help improve the searching.  This is the crowdsourcing aspect. Today there will be more than 100,000 lines of newspaper text corrected by users, this week more than 10,000 items tagged by users and this month 2,000 comments added to items by users.
I’m often asked what the most accessed items are in Trove.  Unfortunately I cannot answer this because it isn’t logged on our servers.  However I do know that newspapers are used more than any other content. I keep an eye on the most used search terms using Google Analytics to get a feel for what people are looking for.  In fact anyone can look at search terms as they happen, second by second, by clicking the link immediately above the Trove search box. For a very long time the top search terms have been Smith, George, death, birth, hanging, suicide, murder, cricket and gold, and also anything topical e.g. Lionel Logue (the Kings Speech). The most popular articles seem to be births, deaths and marriages and articles on murders.  However I have seen a recent trend whereby the terms “knitting pattern” and “knit + cast on” have knocked “death” off the top spot.  I decided to look into this a bit further. I was fascinated to discover that the crowdsourcing in Trove is inter-connecting with another crowdsourcing project.  It’s for knitters and is called Ravelry http://www.ravelry.com


Ravelry is a place for knitters, crocheters, designers, spinners, weavers and dyers to keep track of their yarn, tools, project and pattern information, and look to others for ideas and inspiration. The content on the site is user- driven and created by the knitting community. Ravelry lets you keep notes about your projects, see what other people are making, find the perfect pattern and connect with people who love to play with yarn from all over the world in forums.
The site was started by Jess who had been a knitter and a blogger for a while. She knew that there was all this great information out there from other fiber lovers – but with the growing number of crochet and knitting blogs, finding that information just kept getting harder. It was getting frustrating for her to try and find information about the patterns and yarns that she was interested in using. Her programmer partner Casey thought that he would be able to build a website that could solve her problems, so they started working on it together, introducing it to a few friends at a time.


A key part of the site is the database of knitting patterns, gathered together by the community, described and catalogued by them, and then knitted by them. The user community can favourite them, add comments, add patterns to projects and lists to do. They often photograph the end results and add these to the database.  They can seek help from other knitters on patterns, yarns, techniques and designs.
The site is free but does require a login to look at the patterns.  It is proving immensely popular. In the first weekend 15,000 knitters had signed up.  Apparently quite a lot of these happened to be librarians. * In July 2010 Ravelry appealed to the community to both find and describe patterns. In one week 23,500 users categorised and assigned metadata to 160,000 patterns. The advanced search which draws on these fields for faceted searching is quite amazing, and quite frankly leaves most library catalogues for dead.  Facets include availability, category, yardage, gender, source, fibre, needle size, rating, fibre, difficulty, language and more.  I was quite stunned by this because this it is one of the few crowdsourcing projects I have seen that has very successfully engaged a crowd to help assign metadata to records to the highest possible level.  Cataloguing is a task that most cataloguers and librarians think cannot be done well by anyone except themselves, besides which it would be far too boring to attract people’s interest.  However the knitters can clearly see the value in adding descriptive metadata.  For example by adding yardage  or meterage required they can easily find out by searching on that field what patterns they can knit when they only have x yards left of wool.


So how does Trove come into all this?  Well, as knitting regains popularity and we see the resurgence in ‘retro’ fashion from yesteryear the knitting community are falling with glee on digitised historic Australian newspapers and the Australian Women’s Weekly, particularly from the 1950’s.  Someone has helpfully added the instructions into Ravelry for how to find vintage knitting patterns in Trove, which is search for knit+"cast on" or knitting patterns (now one of the top search terms – see the wordle above).  If you do this in Trove you get nearly 73,000 results for knitting patterns.  Most newspaper included at least one pattern a week. Of all those patterns the community has chosen to add some of the more popular ones into Ravelry so more community engagement can happen.  So far 290 have been added from Australian newspapers and the Australian Women’s Weekly.
The two screenshots from Ravelry below show firstly a classic number ‘a cosy cardigan’ which appeared in the Sydney Morning Herald of 1953. It has been favourited by 145 people, one has knitted it and 93 people have added it to their queue of things to knit next. The person who has knitted it has added notes and instructions on how they did it with a colour picture of the finished garment.


The second shot shows that the most favourited pattern added to Ravelry from the National Library of Australia’s digitised Australian Women’s Weekly collection is… wait for it…… the ‘Elegant Elephant’. It has been favourited by 690 people,  rated 4 out of 5 and easy to knit, knitted by 21 people in a variety of colours, and 174 more people intend to knit it soon.  If you click on the pattern you will see uploaded photos of finished knitted elephants…. 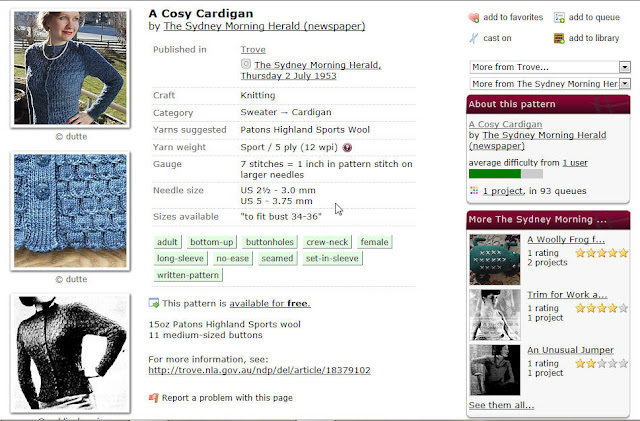 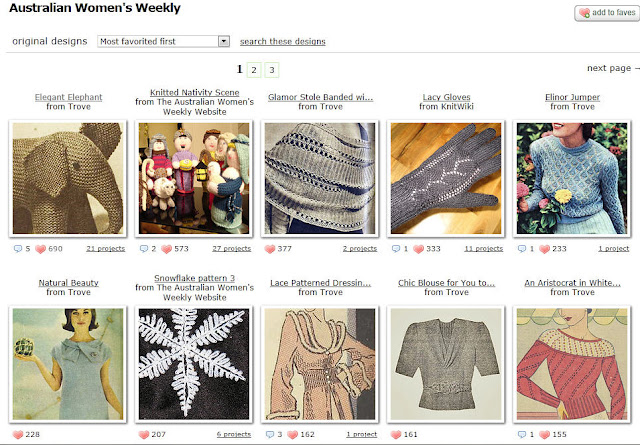 This is a very interesting example of re-use of material from old newspapers, one that was not even considered when newspapers were digitised.  Ravelry is an outstanding site offering community engagement and crowdsourcing that has really impressed me. I love the advanced pattern search by facets.  It clearly shows that for some items users don’t want a dumb it down simple search box. They want ADVANCED SEARCHING, MORE DESCRIPTIVE METADATA AND FACETS!  They are prepared to add the descriptive metadata themselves.
The only thing I have ever knitted myself was a pink and blue tea-cosy for my mother as a present when I was 14. My mother was a teapot collector then, but interestingly only had 2 tea cosies.  Knitted tea cosies are becoming popular again.  However I am contemplating knitting the Australian Women’s Weekly ‘Elegant Elephant’, maybe in pink, my favourite colour? At least if I get stuck I know I will be able to get online help in Ravelry, and it looks easier than a tea cosy!
* I acknowledge the use of Nyssa Parkes article ‘Fibre FRBRisation’ in the November 2011 issue of Incite Magazine.  The statistics on Ravelry user engagement come from this article.
Posted by Rose Holley - Digital Library Specialist at 14:38